Hi, my name is Linda and I’ll be your idiot-tour-guide for this blog post.

Like many idiots out there, I have one of those jobs that 99% of the people in the company (any company) think they could do better.  It’s so simple! (They think.)  Why haven’t you solved those problems yet? (They ask.)

I understand.  I know people who don’t work in my function think it’s so simple, and likely believe people like me just muck it up with manufactured complexity.  The reason I know this is I quite likely do the same about your job.  Are you in Development?  Then I’ve likely uttered something like “Oh, that is easy. Just have them code a new widget that concatenates the necessary information from these twelve data sources, some of them external and outside of our control, and then display it in local language to our users in 60 countries in a color-coded manner. BAM – done!”

In fact, I’m pretty sure I’ve had conversations that went kind of like this:

Me:  Yes, that is certainly a challenge.  We should get the dev guys to crank out some code.  I’m sure that just a couple hours of a developer time would be all that is needed – it’s just a simple change.

Dev Guy:  It’s a little more complicated than that.  We’d need to have a team of developers assess the change.  On the surface, I can tell you it will require a major architectural change.  I would estimate that it would take 1,098 coding days.

Dev Guy:  Why don’t you stick to Sourcing stuff and leave the development of our internal systems to us?

Me:  Because you guys over-complicate it and I make it all so easy.  Really, my way is better.

Dev Guy:  Your way is pure fantasy that surpasses anything Tolkien ever conceived.

Me:  Oh, pshaw!  Nothing is impossible.  Even the word impossible contains the words ‘I’M POSSIBLE!’  I’m thinking you’re a glass half-empty kind of group.

Dev Guy:  Hey, I have an idea – why don’t you consolidate our lawn care vendors globally.  Could you have that done by Tuesday?

Me:  No fair!  You’re changing the subject!  That’s hard!  That would take forever.  Plus, they don’t even have lawn care suppliers in our desert locations, probably.

Dev Guy:  No!  It’s easy.  You just need to put all the supplier names up on a big colorful wheel and spin it.  Wherever it lands, voila’ – that’s our new global vendor.

Me:  But it doesn’t work that way.

Dev Guy:  Kind of like the system change you want doesn’t work that way.  Is that what you mean?

What would be really cool is if people from one function would seek to understand first. You know, ask questions. Do some research.  I’m not saying that simplification isn’t possible, nor am I saying that tremendous innovation is unwelcome.  Evaluate these two statements and tell me which one embraces positive-realism and which is cribbed right from a MacGyver episode:

The truth is that so much is possible if constraints are lifted, but we all have to deal with some constraints.  It’s possible we could do amazing things with more resources or budget, but so often it’s not possible to secure those. It’s also possible we can do some kinda-amazing things with the limited budget and resources we already have. Or some pretty cool things with no budget at all.  It’s possible… I’m not looking to throw innovation out the window!  I love innovation!

I even love someone from another department coming to me with a mind-blowing idea!  It would be better if they came informed and perhaps with an open checkbook to fund it, but hey – can’t have everything, right?

What I am opposed to is someone coming to me acting as if the solution is SO simple, right in front of our eyes, and why are we such idiots that it never occurred to us before?  I try not to respond to such arguments defensively. “Yes, yes. That’s a fabulous idea about how to manage all airline and hotel inventory in our own system. Now, where shall we get the money to fund it and the army of people to build and manage it? Would you be interested in selling the concept to our 600 hotel suppliers and 25 airline suppliers? With you by my side, I know we could do this! I realize there are many companies such as Sabre, Galileo, and Amadeus who exist to do this very thing for thousands of companies, but you’re right – we should build our own air and hotel distribution system. LET’S DO THIS!”

Usually they run away crying. It’s not as satisfying as it sounds.

The thing is, if we can’t have some trust in the expertise of others in their functions, then we should fire them and hire people we DO have trust in.  Or, maybe, possibly, we should pause and think maybe they know more than we give them credit for – maybe we should learn a little before we whip around in their China shop.  Maybe….

Nah. That makes too much sense. Requires work and thinking on the part of people.  We shouldn’t expect people to think – how naive! We’re after simplification, after all. 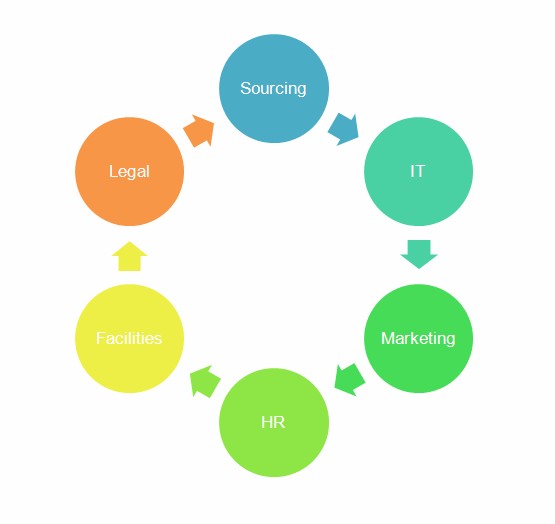 If I could make all the decisions for IT, I promise you the ability to close your eyes and wish hard and have an IT expert at your desk every time you had a problem!  You could charge your devices by blowing on them ever so softly. You would never print an important, confidential document to the printer in the London office. You could log in to any password-protected app just by smiling at it.

Vote for me – Sourcing people have GREAT ideas on how to make IT better!

My name is Linda Doty and I approve this message.