I started my online-social-networking life back in the mid-80s before such a term existed. Heck, back then the Internet hadn’t yet made it out of the science labs and universities. Windows v3 wasn’t yet launched and there was no such thing as the world wide web. Back then, we used 1200 baud modems and our regular phone lines and we dialed up to local Bulletin Board Systems (called BBS’s) because local calls were free and long distance calls were expensive.

I was a BBSer. I worked for a small computer company, and the technicians were all glorious geeks who opened up this world to me. I took my 1200 baud modem home to my IBM XT clone with its RGB monitor and I plugged it into the phone jack on my wall.

. Text smileys were all we had, so we got creative with them, and we liked it that way.

In social media today, the graphical emoticons have expanded and number in the many thousands. They are common on instant messaging platforms and other social sites. Some people love them so much, they make their content rain down with emoticons. Others – not so much. They see them as unprofessional, even juvenile.

Here is my confession: I love them. I recently let my freak-flag fly where emoticons are concerned in a blog post on my company’s social platform. I did it a little tongue-in-cheek (that means I was going for levity, if the phrase doesn’t translate globally). In fact, since I am often going for levity, perhaps that is why I feel the need to use them. Making a comment with a

can yield very different results. I believe in using humor in the workplace and humor can be tricky with written word, so these little images help me not to be misunderstood – not to be taken seriously when I don’t intend to be serious.

Following my posting of that blog, a few people commented on use of emoticons. I was all ready to take grief for it, but the response was pretty much positive – people feel they add clarity, even levity.

I’ll confess further: I occasionally use them in business emails. Oh, not emails to customers, not anything official. I wouldn’t mind using them more, but I’m conservative in this regard. I use them to thank someone or say good job or even happy birthday. I have my own little folder of my favorites:

On the Jive platform at work, people see me use this one a lot, as I am the (self-appointed) queen of our social-network:

People closer to me have likely seen some of these:

Some of the ones I love, I don’t use at work much, even if they accurately depict my mood in any given moment:

You can see how annoying it could be if someone overused them. Where emoticons are concerned, less is more, I think. Use them sparingly if you’re going to use them.

I thought it might be an interesting discussion. Do you use emoticons at work? Do others use them? Is there a negative perception of them when they’re used? Do they have a place in business?

Sound off! Or just share your favorites – a picture is worth a thousand words, right?? 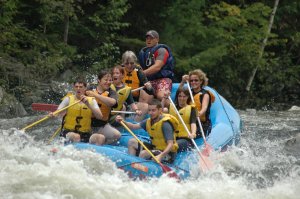 The dictionary definition of flow is to move along steadily and continuously in a current or stream. That sounds about right when you’re talking about the physical world, but what if you are referring to the space between your ears?

A psychologist named Mihály Csíkszentmihályi (thank goodness for copy and paste) defines flow as the state of complete immersion. His exact words are “…being completely involved in an activity for its own sake. The ego falls away. Time flies. Every action, movement, and thought follows inevitably from the previous one. Your whole being is involved, and you’re using your skills to the utmost.”

As a writer, I know this term and I know this state of being. The words flow out of you without any effort on your part whatsoever. Those who pursue creative endeavors such as writing, painting, composing and the like are familiar with this. For athletes, it may be referred to as being in the zone. It’s a state of ultimate performance.

Is it a state you achieve inside your head, or does it rely upon external factors? Yes, yes, maybe, we don’t know. We are learning, though – we know more than we did before. In any case, the perfect storm and – BAM – you have flow.

I’m not the right person to explain how it works in terms of brain-chemistry and all that sciencey stuff, but recognizing that it exists, I want to talk about how we harness it rather than just stumbling into it, whether for our own gain or for the success of our teams or businesses.

Can you imagine? What if you owned a business and you cracked the code for helping your employees tap into a flow-mode more frequently? You’d be sitting atop the Justice League of performance – you’d have an army of people with incredible powers at your beck and call. There would be no stopping you! How cool is that?

It’s not just about increasing productivity and improving profits. Heck, some managers do that with a whip and a threatening demeanor. This isn’t that. Flow is a positive state for your team, positive for individuals. If they can find their way there more often, they will be more productive, yes, and they will be more creative and innovative too. AND they will be happier.

Flow is a drug. It unleashes the brain chemicals (neurotransmitters) responsible for focus and attention. Ones that have those upper-effects we so desire.

I had a boss once tell me “It’s easier to pull someone back than it is to light fire under them and get them moving.” Motivating others through traditional means is challenging and often ineffective. It’s better to create conditions where people motivate themselves. Build a foundation upon which they can tap into their own flow and you can conquer the world, or at least the project you have built into your team’s objectives.

Think of it this way: if you have an 8-person raft on still waters, the amount of effort and coordination to get that thing moving down the river is considerable. And to get it moving quickly? Even bigger. What if there were a strong current beneath your raft? It would travel rapidly on the power of that current and the team members would be energized and infused with breathless excitement. Their focus would no longer be on moving the raft, but on optimizing the journey, keeping it upright, guiding it, getting to the finish line.

Not only would the result be superior, but the people on the journey would feel happier. They would enjoy a heightened level of satisfaction with the result. The amount of effort would feel less. The feeling of accomplishment would be significant.

We have a lot to learn about tapping into flow, but we know some.

Mihály Csíkszentmihályi states that ennui is the acute opposite of flow. Ennui is defined as a state of utter weariness and discontent and it is, therefore, a mortal enemy to flow. Another enemy is distraction. If the menial detritus of life is taking up all of our head-space, we have no way to invite flow into the picture. We’ve all surely heard the saying ‘get in the zone’. It’s not ‘get in the zones’, which makes multitasking another enemy of the state.

Flow is the proper alignment between passion, purpose and the conditions designed to let them roar. Those conditions include freedom from too many distractions and breathing-room so one can focus on opening the channels and letting the energy flow in.

As an individual, I have not harnessed flow to the point where I can conjure it up at will. I recognize it when it hits me. With writing, for example, my brain goes into overdrive and the words and paragraphs tumble out, practically fully formed before my fingers can get them onto the screen. My body becomes merely a court-stenographer for my brain. I know when it comes, I need to simply let it. I can’t say “I don’t have time for that now, I’ll do it later.” It won’t be there later. I need to clear my schedule and let it flow.

Trying to find flow when it seem elusive is more difficult. For people like me, this is commonly known as writer’s block,. In my work life, it’s the block that doesn’t let me clear a hurdle, solve a problem. I haven’t fully discovered the secret to solving it, but I do have some tricks that help. Good sleep, enough head space, and most importantly freedom from distraction.

Have you ever noticed that when you are driving alone, or in the gym working out, that’s when inspirations hit you? That is because your physical world doesn’t impose distractions on you in these situations, your mind is immersed in thinking about whatever it is you are thinking about and it gets the cogs turning and gaining speed. You have created conditions optimal for flow. You aren’t interrupted by e-mail or phone calls or items on your to-do list in those moments. Instead, it is free to jump on a raft and ride the current.

Learning about how to invite flow into my life more often is important to me for all the reasons I give above. I want to feel that sense of ultimate performance, productivity, accomplishment. I want to create the space in my life and in my head, to allow for it. I want the energy it brings me. I want the results it delivers. I want all those things as an individual, and as a manager in business, I want that for my team.

Can you think of a time in your career where you worked on a project and it just seemed that every member of the project team was firing on all cylinders? Where the individuals felt energized, happy, and proud? Where deliverables were completed at a dizzying rate? Ideas were arising rapidly? The benefits are evident, shared between the individuals, the collective team, and the company and, yes, ultimately, the shareholders.

As a business manager, if you wish to benefit from the effects of flow, you are not powerless, especially when you have the support of those above you. Give your team a mission they believe in – a purpose. Share your passion. Passion is the gasoline that fuels the human engine. Give enough space to invite in the energy of flow, then buckle up and enjoy the ride.

You can’t force it. You can’t mandate it. You can’t manufacture it. All you can do is create optimal conditions and invite it, and when it hits? Well, congratulations on achieving whatever it is you and your team set forth as your mission.

With the power of flow, you can’t lose.